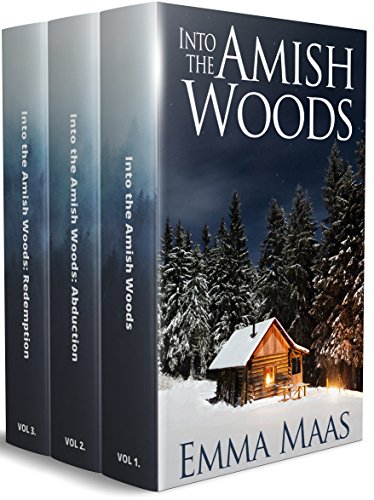 "Leaving the Amish is never easy, but it’s never been this dangerous..."Romance suspense at its best, from Amish Romance author Emma Maas. The entire series now available together in one box set for the first time!When a young, trouble-hearted Amish woman seeks help from an Englisher with dark, ul...

“Leaving the Amish is never easy, but it’s never been this dangerous…“

Romance suspense at its best, from Amish Romance author Emma Maas. The entire series now available together in one box set for the first time!

When a young, trouble-hearted Amish woman seeks help from an Englisher with dark, ulterior motives, she now must flee for her safety with only her struggling faith and secretly-in-love childhood friend to protect her through the night. Will she make it home?

(Spoilers ahead in subsequent books 2 and 3 descriptions)

Into the Amish Woods

When the time comes to confront the growing doubts about her place in the Amish way of life, the troubled-hearted but determined young Sarah Troyer makes a fateful decision to meet up with an Englisch boy she recently met to help her on her road to the new life. But he’s not who he appears to be, and what started as an innocent journey quickly turns sinister when her childhood friend Isaac secretly follows her and discovers her new friend’s ulterior motives.

Now, with both of them on the run they must make it through the night if they hope to return home and find their way, and in more ways than one. For Sarah Troyer isn’t just lost in the woods, she’s lost inside. Will her faith be renewed? And will the boy she’s overlooked for so long be the answer to her prayers?

Into the Amish Woods: Abduction

They thought their troubles were over; they were wrong. Sarah Troyer is fed up with Isaac, and he’s just as unsure about her. Three months later and that horrible night still weighs heavily on both their hearts and minds. But little do they know they’re about to relive the nightmare, only this time much worse.

For Clint is back, and he’ll do anything to get what he wants and go to any lengths to get it. Now, with Sarah running off in anger, Isaac must trust his instincts in a race against time to secure her freedom, and spare her from the nightmare she’ll face. Sarah must keep her wits about her and rely on her strength and the love of a friend if she is to make it. For love is stronger than fear, but will it be enough? For Sarah and Isaac, it’s about to be put to the ultimate test.

Into the Amish Woods: Redemption

Sarah is recovering from the aftermath with Clint. She and Isaac may have escaped, but that doesn’t mean everything is okay. Doubt, anxiety and nightmares are the new normal, and they need each other more than ever if life is ever return to normal.

But normal isn’t on the menu for either of them.

Sarah wants to be left alone, and her ideas lead her through dangerous territory, both mental and physical. She dares fate, and Isaac is convinced she has a death wish and wants nothing to do with it.

But just because you’re paranoid, doesn’t mean someone isn’t out to get you. Now in a bizarre twist of fate, her worst fears may yet come true.

It’s all over…or is it? She’ll have to fight for her life once more, and this time it’s for keeps.