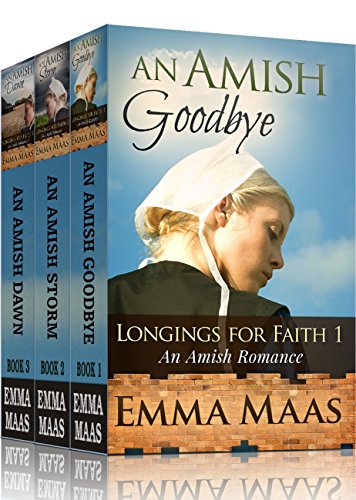 The #1 Bestselling Amish Romance Trilogy now with EXCLUSIVE Bonus Content (An interview with the cast of the story!)*Always FREE with Kindle Unlimited*An Amish GoodbyeTwo years after Ellie King's father was killed in a horrible accident, Ellie carries her guilt like a badge. Having resigned herself ...

The #1 Bestselling Amish Romance Trilogy now with EXCLUSIVE Bonus Content (An interview with the cast of the story!)

Two years after Ellie King’s father was killed in a horrible accident, Ellie carries her guilt like a badge. Having resigned herself to living a life devoid of love, Ellie’s sole mission is to hold not only her family together, but their business as well.

When she meets a socially awkward, but truly loving man, Ellie’s internal struggles and belief that God has designed a plan He sees fit for her, prevent her from accepting love.

Bound by duty, so she thinks, the sullen Ellie is thrown for a loop when her mother instructs her to seek out the woman that is to blame for her father’s fatal accident. Now, Ellie is forced to face her own guilt and learn to not only forgive the troubled woman, but forgive herself. Doing so will allow her to open a new chapter in her life, but beginning anew will require making herself vulnerable and learning to accept that above all things she is deserving of all life has to offer.

Is Ellie ready to heal and let love into her heart?

A storm is brewing.

Ellie’s world is rocked when Erin pays a visit to the King farm. Daniel holds dark secrets, and Erin plots to destroy the happiness that Ellie has finally found.

Nothing is what it seems, and hearts are broken. Ellie feels anger like never before, yet is unsure about what to do. Will her and Daniel’s relationship survive? Or will she make a decision in the heat of a life-changing moment that will ruin their future together?

Dark times lie ahead for Ellie and Daniel. Will their love be saved? Or ravaged apart?

A new dawn approaches. But heartbreak lies ahead.

Ellie and Daniel are separated by a seemingly bottomless chasm of their own making. Emotions run high and patience runs thin. Only a willing heart can turn things around. But who will take the first step? Will Erin follow through on her threats, and what will happen if she does? Surprises are in store for everyone, and not all good. But not all are bad either, as there are surprising new beginnings for some.

This is the third book in the Longings for Faith trilogy. Will faith finally prevail?

Emma Maas takes you inside for an interview with the cast, here’s a sample to explain how it works:
This is an interview with the cast. Yes, I know they aren’t real (and no I haven’t gone crazy, yet!), but I thought it would be fun to do. I’ve always loved hearing actors talk about the characters they’ve played in my favorite films, and I thought you might enjoy what an interview might look like if the characters in the story were played by actors, as in a film. Therefore, I’ll refer to this as if they were actors in a film, and they are being interviewed by the author (me) as a host before a meet-and-greet to a select audience of fans. This is about having fun as it will also help you to get to know the characters even more, in a fun and roundabout way!

In the interests of keeping things a little more clear, I’ve made the actor names something easy for you to keep straight. Therefore, Daniel=Derrick (both start with ‘D’), Matt=Mike (both start with ‘M’), Ellie=Jenny (the only one with a unique name) and Erin=Erin (her name ‘in real life,’ so, it’s easy to remember!). The rest of the cast couldn’t attend this round. But they might make a future appearance. 🙂 Hope you enjoy! -Emma.